Already have an account? Login here.
Thank you! Your submission has been received!
Oops! Something went wrong while submitting the form.
Home
/
FElix's Library
/
Love, Of A Kind 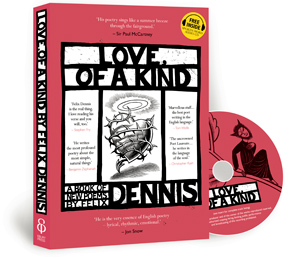 Love, Of A Kind

Love, Of A Kind was compiled and partly written under the illusion of a sentence of death. Diagnosed with cancer of the throat in January 2012, Felix Dennis responded by selecting, revising and writing poems for what he believed would be his last book. His themes are love, life, death and taking stock.

Following successful radical surgery and radiotherapy, he is now in remission, once again engaged in a life filled with poetry, live performance, the planting of trees and the getting of money. As the late Robert Woof, Director of the Wordsworth Trust, once observed: ‘You feel he lived it so richly, so dangerously, to be so wise for our delight.’

Dennis’s legions of fans will be delighted with a sulphurous collection of poems that pulls no punches, makes no excuses and seems ever ready to spit in the eye of mortality; poems that Shirley Conran has said ‘invoke sorrow as fast as regret, pain as readily as passion, and love as tenderly as murderous rage’.

Here is the seventh book of verse from a writer one instinctively feels is at the peak of his creative powers, one the American critic and novelist Tom Wolfe describes as ‘the best poet writing in the English language.’

A Bowl Of Quince

The Rill of Hope

There is No Future