Already have an account? Login here.
Thank you! Your submission has been received!
Oops! Something went wrong while submitting the form.
Home
/
FElix's Library
/
Lone Wolf 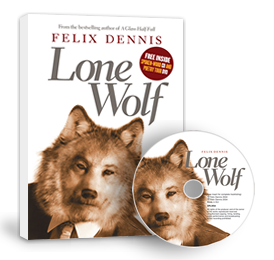 According to The Sunday Times, Dennis is Britain’s 65th richest individual. Two years ago he startled the British literary establishment with the release of A Glass Half Full— which has since become the biggest-selling book of new poetry in the UK for years. Its 10,000 copy print run has completely sold out and the book is being reprinted.

Audiences have flocked to hear Dennis perform on tour. Last September, The Royal Shakespeare Company invited Dennis and six RSC actors to read his verse at The Swan Theatre, Stratford-upon-Avon. The event was sold out in hours.
The RSC is now planning to join Dennis with its actors for two further events this year. One will occur in late September in New York City, followed by a repeat performance back in Britain at The Swan Theatre in 31 October 2004.

Tom Wolfe, the American novelist and critic, calls Dennis ‘a 21st century Kipling’ whose poetry ‘rollicks and rolls with rhyme, meter and melody.’ Another reviewer sums up Dennis’s work by saying: ‘This is the way poetry should be. This is the sort of book that can make poetry popular again.’

Dennis’s verse has been the subject of two major arts and current affairs television programmes: The South Bank Show in Britain and 60 Minutes in America. Braille and spoken-word editions of the book have been produced by the National Library for the Blind and the Royal National Institute for the Blind.

In September, A Glass Half Full will be published in America by Miramax Books. Dennis will tour the USA reading his poetry in that month, returning to tour Britain for the last three weeks of October to promote the launch of Lone Wolf.

The first fifteen thousand copies of Lone Wolf will contain not only a free spoken-word audio CD, but also a 50-minute documentary DVD of Dennis on tour called ‘Did I Mention the Free Wine?’ made by Australian film-maker, Fiona Prendergast.

I Have Wasted the Day

Advice To Any Daughter

A Room of My Own

Ballad of the Treble Balls

A Walk to Wales